With the release of Fantastic Beasts and Where To Find Them, I’d like to take a moment to talk about magic. And I’d like to tell you that magic is real.

You see, as a child, I was a great believer. The sight of mushrooms and clover-patches made me glow inside. I saw fairies in our backyard (I admit now they may have been dragonflies, but at the time I was convinced). I paid special attention to antique wardrobes and mirrors – hoping a Talking Beast or one of Shirley Barber’s unicorns would burst through the other side. I saw the seas and sky as portals to other worlds. When I was five, I’d spin below the mango tree at my primary school, watching clouds swell and blossom, and think of its branches touching the sky and extending into other realms. If I went to the beach, I imagined that the sunlight glimmering on the water was a sort of secret code, sent from one magical race above water to those below it. I was fully aware that I couldn’t build a time machine – the only materials at my disposal were sticks, leaves, gluggy glue, and glitter – but I still wanted to try.

I always knew that I was reading fiction. That didn’t matter to me – what mattered was that it could all be true. I could be like Lucy Pevensie or Harry Potter because if I was to cross paths with an umbrella-carrying faun, or encounter a house-elf, I’d respond with more joy than surprise. I loved the idea that magic could be lurking around the corner: a marvellous hidden world (or several) co-existing with our own. But, sadly, it seemed that this world was to remain hidden. My life was never interrupted by a wizard who ushered me out of my messy bedroom (it’s basically the same as a hobbit-hole, right?) to send me on an adventure. I was never conscripted to work with the LEP (Lower Elements Police), mesmerised by good ol’ Holly Short, or mind-wiped by a conceited centaur (but if I was I wouldn’t know it, would I?). And my letter from Hogwarts must have gotten lost in the mail.

So, for kids like me who grew up under the shining influence of magic, you can imagine how soul-crushing reality turned out to be. Something terribly sad happened to me and all of the believers like me: we grew up. We grew up and were slapped by life’s blandness or bleakness… and sometimes its tragedy. It became apparent that good does not always prevail. Help does not always arrive just when it’s needed the most. And that spark of idealistic determination that defines the fantasy hero is hard to hold onto. Part of growing up is losing your innocence. It’s easy to feel disillusioned when faced with uncertainty, betrayal, corruption, heartache… and other issues, like the loss of a loved one, human and animal exploitation, poverty, and climate change. It can be easy to think, ‘This world is pretty screwy. Where’d all the magic go?’. Or, to echo C3PO’s sentiment: ‘We’re doomed.’ Or, to quote Private Hudson from Aliens, ‘We’re all gonna die! Game over, man! Game over!’.

But, when you think about it, any compelling magical world is far from problem-free. Heroes are heroes in any realm because they emulate positive qualities like kindness, bravery and selflessness – qualities that we might recognise in the people around us. This is reassuring. And while magic may not be experienced as a tangible thing, it is real nonetheless. As the fox in Antoine de Saint-Exupéry’s book, The Little Prince, says, ‘What is essential is invisible to the eye’. Magic moments might very well be intangible or invisible, because some of the most real things that you’ll ever experience will happen inside your head. Your thoughts change how you perceive yourself and interact with the world. And unless you experience insights about life, pain, and love next to someone who’s become adept at knowing you – and has learnt to read your soul in your expressions and mannerisms – these moments may go unseen, unnoted. That doesn’t make them less real. (And, don’t get me wrong, some of these moments might happen because of the person who’s beside you.)

Magic exists because we recognise it in the inexplicably beautiful, or we create it. As a child, I allowed a sense of wonder to uplift me – and that was magical. If I stop and think about it, I still chase that sense of wonder. (I sent myself on an adventure to London; I hang out with hard-core, sword-wielding nerds; I am mesmerised by the sky’s colours, and I choose not to forget my mistakes. Because, let’s face it, that whole mind-wiping thing resulted in some serious personality-regression for Artemis.)

Magic simmers in the little moments. In listening to a spine-shivering song, or reading a line in a book that makes you ache. Magic is in laughter. In gliding over ice, running until your breath is raw in your throat, eating pie, or taking in a staggeringly beautiful view. Magic is meeting another person’s eyes and realising that you can hear their unspoken thoughts. Magic is in sharing ideas, emotions, time. So, I’m going to give you the same advice I’m giving myself: search for magic in the everyday. Naivety and idealism are not synonyms. You don’t need to hide from issues in order to seek out the good. Be idealistic. See magic around you, and make magic. It’s there if you look for it. Trust me. 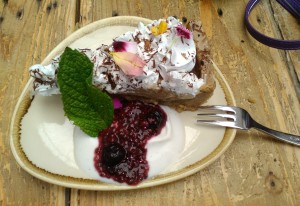